What’s next after the COVID-19 pandemic? Higher inflation?

The global economy continues its healing process with a growing number of countries lifting restrictions. This will allow most domestic-oriented sectors to slowly return to normal in the foreseeable future. Furthermore, some international borders could re-open soon with Europe announcing it was ready to receive tourists who can prove that they have been fully vaccinated1.

The job market offered an interesting development last month with April’s disappointing U.S. nonfarm payroll numbers (NFP). On the back of resurging economic activity, the investment community mostly expected the NFP to gain momentum after the creation of almost 1.4 million jobs in the previous two months. However, the consensus turned out to be too optimistic with the U.S. economy creating “only” 266,000 new jobs.

Many analysts suggested that the lower-than-expected gain reflected a lack of available workers rather than lower job vacancies as employers continued to report labour shortages. This is corroborated by the March Job openings and labor turnover survey (JOLTS) which reached a record number of job openings in the U.S. of more than 8 million in March. The issue of labour shortages could resolve itself in the coming months as the incentives to stay home decrease and those to go back to work increase. Several state governments scaled back the additional unemployment benefit or even granted ‘signing bonuses’ to unemployed residents who are getting a new job. The shift to online learning was a key factor keeping some parents out of the labour market. In recent weeks, the two largest school districts in the country announced a return to in-person classes in the fall, removing an obstacle for some parents to return to work2. 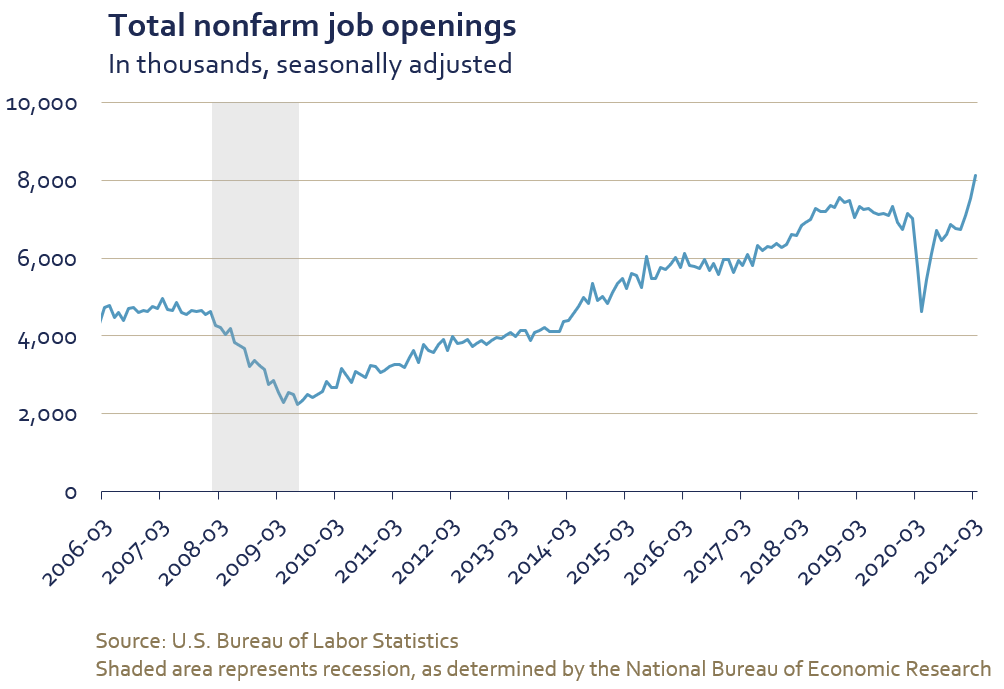 In addition to the re-opening of the economy, a key macro development that marked the first half of the month was the rise in inflation expectations which culminated with a much stronger than expected increase in U.S. inflation in April. The headline CPI index rose 4.2% year-over-year after a 2.6% gain in March. According to Bloomberg data, economists were expecting a 3.6% gain.

Increasing inflation expectations are spreading beyond the investment community with the University of Michigan inflation expectation consumer price index rising to its highest level in over a decade. At the same time, higher prices have started to impact the way companies are managing their business. The topic has become prevalent in management conference calls with investors: Bank of America analysts noted that mentions of the word “inflation” had more than tripled last quarter. If businesses are unable to pass on the additional costs to consumers, then their profit margins will undoubtedly be under pressure.

Mentions of “inflation” on calls more than tripled so far, pointing to higher inflation expectations.

These concerns, if sustained, could have a negative impact on consumers’ behaviour. Already, in the U.S., the sharp rise in home prices has translated into a significant decline in homebuyers’ confidence. The housing sector helped drive economic growth, but rising prices combined with slightly higher interest rates could potentially slowdown the sector’s activity. 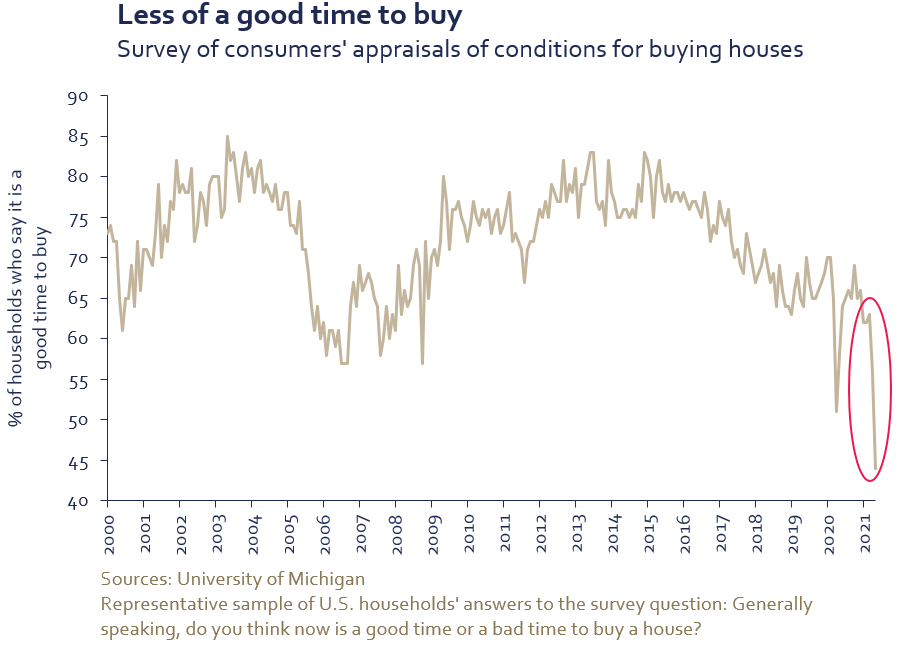 Some central banks (Canada, New Zealand, Norway, and United Kingdom) signaled a willingness to tighten monetary conditions earlier than expected as they adjusted their policy message to reflect the improving economic backdrop. However, the U.S. Federal Reserve and the European Central Bank both talked down inflation-related risks as they believe the recent increase is attributable to transitory factors that will wane as the economy normalizes3. They suggested that the recent pickup in inflation will not deter them from keeping monetary conditions ultra-accommodative and this helped curb inflation expectations in the second half of the month.

Investors continued to believe central banks’ support remains unwavering and as a result we have not seen a sustained pull-back in equity markets over the last 14 months. Investors’ “buy the dip” mentality appears to be alive and well. 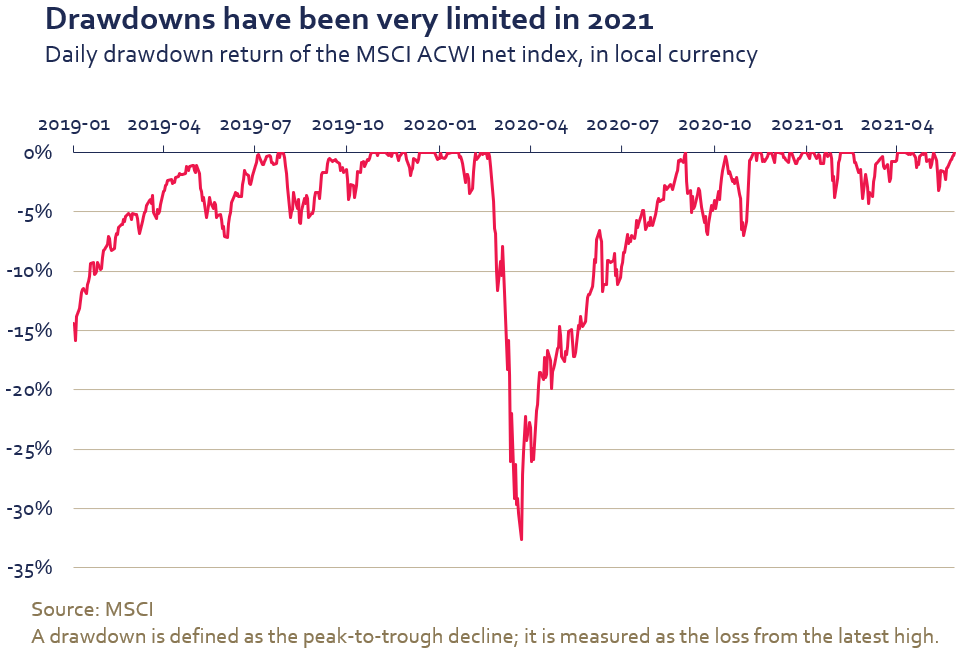 A combination of strong earnings and improved economic visibility was enough to convince management teams that they did not need to hoard cash as they had done at the onset of the COVID-19 pandemic when uncertainty reigned. Therefore U.S. companies announced record share buyback programs totaling $US 484 billion in the first four months of the year4. We have also observed a similar acceleration in share buybacks announcements from European companies5.

This is a positive development that could be supportive for equity markets in the coming months although any sign of trouble could force companies to put their buyback programs on hold. 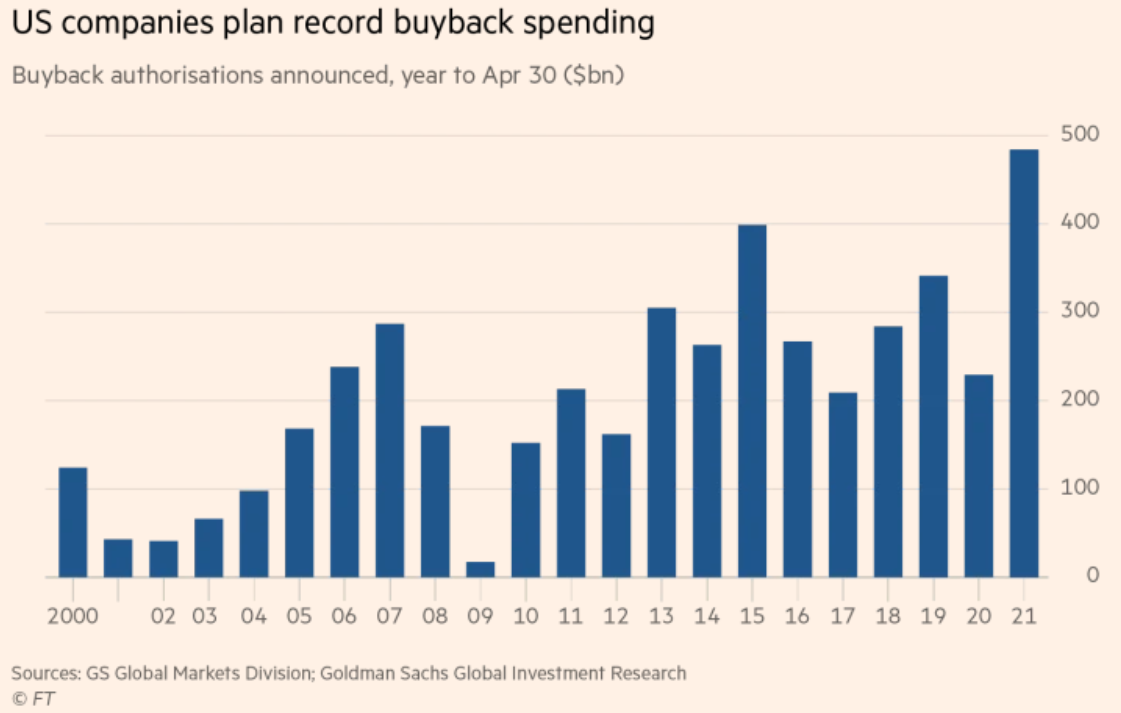 Over the last month, equity markets rose slightly as they continued to hover near record levels. The MSCI ACWI gained 1.1% in local currency terms during the month of May, bringing the gains for 2021 to 11.0%. From a regional standpoint, Europe (+2.3%) and Developed Asia (+1.7%) both benefited from the reflation trade as investors rotated away from more expensive cyclical sectors towards less expensive ones such as energy and financials. The rotation also pressured U.S. equities: the MSCI U.S. index gained a measly 0.4% in May. Despite Chinese equities (+0.4%) offering a similar return, emerging markets were able to slightly outperform developed markets with a 1.3% gain.

The jump in inflation expectations had an important impact on financial markets. In the bond market, the U.S. 10-year treasury yield rose to 1.59% which in turn weighed on sectors such as technology that had been benefiting from low interest rates. Technology’s relative performance touched a low in mid-May, but the selling pressure appeared to abate when central bankers downplayed the inflationary risks and treasury yields eased back towards 1.60%. Despite the sector’s recent underperformance, we believe there is more room for downside risk for technology stocks: since they account for a large part of investors’ portfolio, they could bear the brunt of the selling pressure in a de-risking environment.

One sector that welcomed higher interest rates was financials which was the second-best performing sector last month with a 4.2% return, just behind energy’s 4.3% increase. 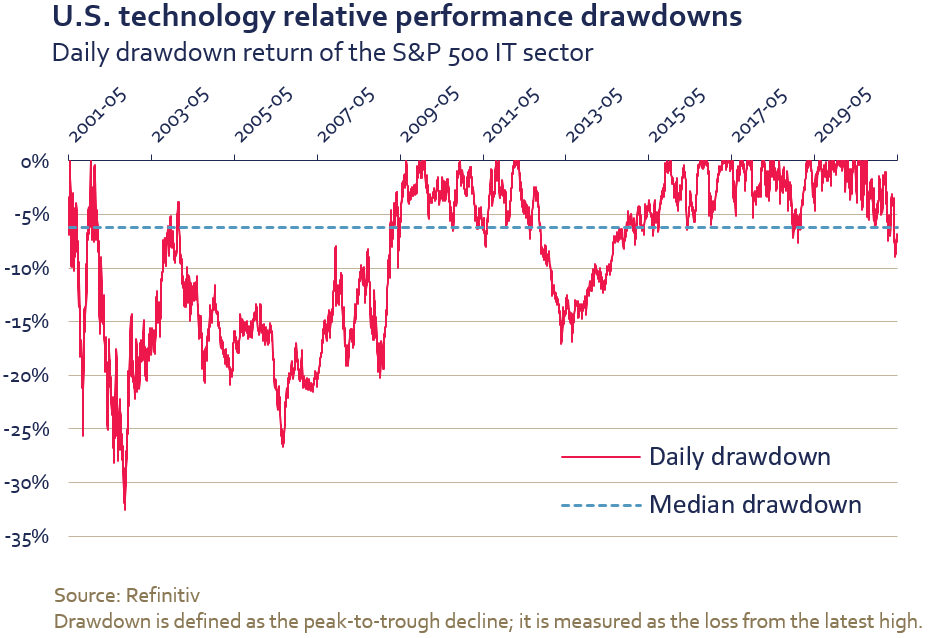 In commodities, investors pushed prices higher as they continued to position themselves for the reflation trade. Copper rose 7% to almost $5/lb in the first two weeks of the month, while the price of iron ore climbed almost 20% over the same period. However, the current backdrop in China, which plays a large role in the supply and demand of commodities, seems to be a headwind since the country appears to be trying to limit the rise of commodity prices. This may mean that investors’ bet on reflation pushed the price of some assets a little too far in recent months. The small dip in U.S. real interest rates, from -66 basis points to -71 bps, helped drive the price of bullion higher. The price for an ounce of gold was $1,905 by the end of the month, up more than 7%.

Change over one year

Our base case economic scenario has remained unchanged. After the current cyclical rebound, persistent structural overindebtedness should lead to sluggish economic growth. In addition, central banks, which are refusing the purging of bad debt required for a sustained recovery, continue to print money to finance deficits. This may lead to higher inflation and has already resulted in very rich valuations, even though the valuation of the MSCI World index has slightly improved from the 96th to the 94th percentile of its historical distribution over the month of May. Sentiment remains stretched and we see a number of risks on the horizon, including the very risky positioning of a number of investors that may wreak havoc in some areas of the market as well as inflationary pressures that may in turn result in higher interest rates. Therefore, we maintain our cautious positioning geared towards protecting our client’s capital.

We welcome any questions or comments you may have. We can be reached at service@hexavest.com.

Source of all data and information: Hexavest and MSCI as at May 31, 2021, unless otherwise specified.

This material is presented for information and illustrative purposes only. The opinions expressed in this document represent the current, good-faith views of Hexavest at the time of publication and are provided for limited purposes, are not definitive investment advice, and should not be relied on as such. The information presented herein has been developed internally and/or obtained from sources believed to be reliable; however, Hexavest does not guarantee the accuracy, adequacy, or completeness of such information. Predictions, opinions, and other information contained herein are subject to change continually and without notice and may no longer be true after the date indicated. Hexavest disclaims responsibility for updating such views, analyses or other information. Different views may be expressed based on different investment styles, objectives, opinions or philosophies.

All references to the “Hexavest ACWI equity portfolio”, to the “ACWI Equity representative portfolio”, to the “portfolio”, or to their performance in this document refer to an actual portfolio managed by Hexavest which is used to objectively represent the firm’s Global ACWI Equity strategy. The performance of this representative portfolio has been included in Hexavest’s ACWI Composite (Composite) since its inception in 2014. The Composite includes portfolios that invest primarily in equities of companies located in the developed markets and emerging markets of Americas, Europe & Middle East and Asia Pacific. Hexavest uses an investment approach that is predominantly “top-down” to construct diversified portfolios that typically contain more than 275 stocks. Asset allocation between regions, countries, currencies, and sectors can deviate substantially from that of the benchmark. Some portfolios may invest a small portion of their assets in countries and currencies not included in the benchmark. A client’s actual holdings, performance and investment experience will be different from that shown.

Gross-of-fee performance results are presented before management and custodial fees but after all trading commissions and withholding taxes on dividends, interest and capital gains, when applicable. Such fees and expenses would reduce the results shown. Fee levels may vary from client to client depending on the portfolio size and the ability of the client to negotiate fees.

The MSCI ACWI Index is a broad-based securities market index and used for illustrative purposes only. The MSCI ACWI Index is a free float-adjusted market capitalization weighted index that is designed to measure the equity market performance of developed and emerging markets. Performance for the MSCI ACWI Index is shown “net”, which includes dividend reinvestments after deduction of foreign withholding tax. Broad-based securities indices are unmanaged and are not subject to fees and expenses typically associated with managed accounts or investment It is not possible to invest directly in an index. MSCI data may not be reproduced or used for any other purpose. MSCI provides no warranties, has not prepared or approved this document, and has no liability hereunder.

This material is for the benefit of persons whom Hexavest reasonably believes it is permitted to communicate to and should not be reproduced, distributed or forwarded to any other person without the written consent of Hexavest.