Everybody loves the FANGs

Here is why we don’t.

Given the relentless momentum in the stocks known by the acronym “FANG” (Facebook, Amazon, Netflix and Google), we are providing our insight – based on our three vectors of analysis – to explain why we believe these stocks are at risk of a fall.

They are facing major macro risks that are not discounted

Online advertising growth is not infinite

Google and Facebook have ridden the secular shift of online advertising for more than 15 years. It is difficult to determine where online advertising will plateau as a percentage of total advertising expenditure, but as magazines and newspapers are now almost entirely replaced, incremental gains will be more difficult. Furthermore, we would add that advertising is a cyclical business that does not grow any faster than the economy. We are currently in the second-longest expansion on record. Should economic activity slow, we believe the growth of ad revenues for Google and Facebook will slow as well.

Online advertising is a disappointment

A study by Ebiquity, a data-driven media and marketing consultant, reveals that advertisers are realizing that the return on investment (ROI) is not as high as expected. The results showed that the effectiveness of online and social media advertising was lower than that of traditional media, and much lower than advertisers’ perception. 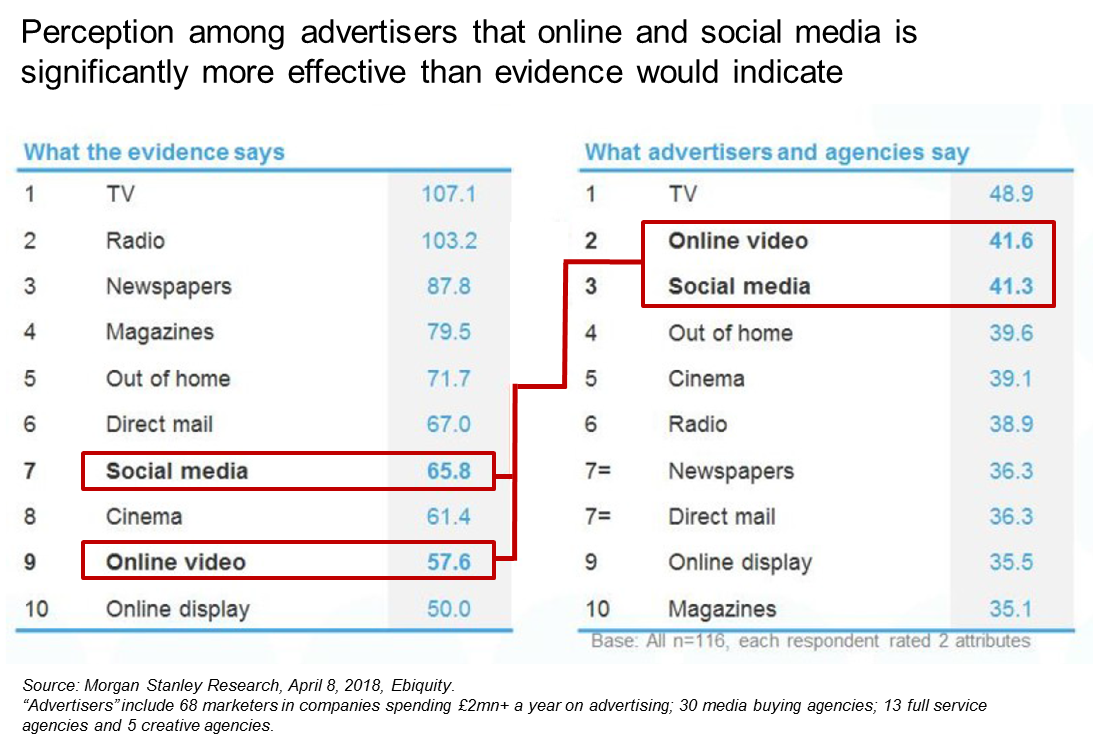 In a CMO Council survey of 233 senior marketers published in April 2018, 62 percent indicated that reports of false metrics from Facebook have pushed them to pull back on online spending. Procter & Gamble, Unilever and Adidas are just some examples of large advertisers reducing their online spending.

Google management has stated that the rebound in revenue growth it has experienced over the last two years is due to higher ad loads (showing more adds per page), and not to page impressions (which refers to the number of times a web page has been viewed). Facebook, for its part, is now pushing prices up as impressions have slowed considerably. 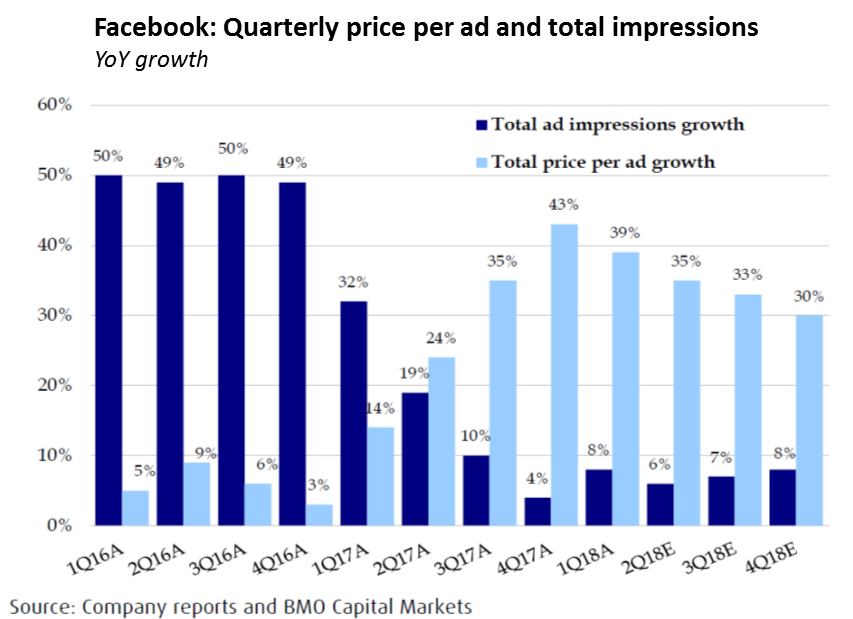 The General Data Protection Regulation (GDPR), which seeks to give users control of their personal data, is being implemented in Europe on May 25, 2018. In essence, the law forces online companies to gain consent from users before they can use their personal data, and if the users opt out, they shall continue to receive the same services. It is likely a first step toward a template for international regulation. Given the nascent debate over the ROI of online advertising, a reduction of data might compound this problem.

Margins are coming under pressure

For Google, it is a mix shift. Desktop search is an extremely high-margin business. According to Google’s CFO, anything they do outside of desktop search (including mobile search), is margin-dilutive. This can be seen in the steady move down in margins over the last 10 years. As for Facebook, it is ramping up spending on security and video content and expecting expenses to increase at a rate of 50%-60% in 2018, from 30% in the last two years. Amazon has famously low margins, with the exception of its cloud business, for which the company is enjoying a market share close to 40%. But competition for the cloud is increasing steadily as Microsoft, Google, and IBM are ramping up. 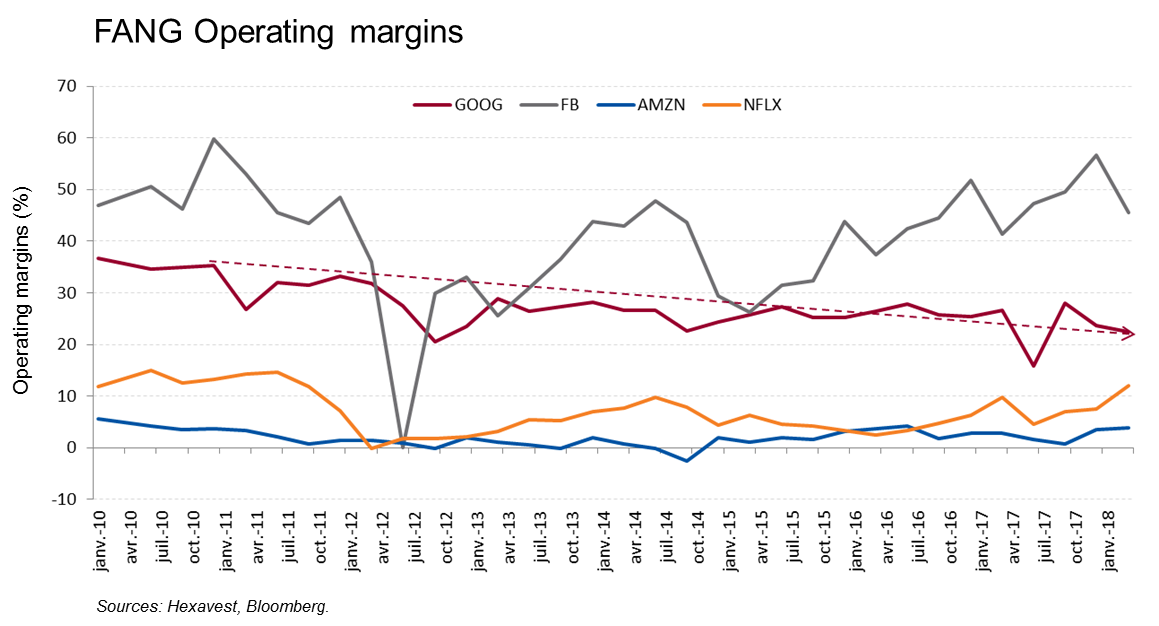 They are increasingly competing against each other

Speaking of margins, all four members of the FANG stocks are beginning to compete with each other, which we believe will probably impact margins and growth. All four companies now offer online video content. Amazon and Netflix are in direct competition, while Google and Facebook are both offering free video. Amazon, Google and Facebook are now selling online advertising, while Amazon and Google both offer cloud services. They also compete on devices such as smart speakers. Amazon is trying to develop its own browser, and possibly its own search engine.

Governments are looking for ways to tax them

Newspapers have largely covered the fact that FANG stocks are paying very little taxes due to tax planning strategies. International governments, notably the European Commission and India, are studying ways to tax their revenues. The companies even get to benefit from very low tax rates in the US, where they are domiciled. In 2017, Amazon paid no federal tax on $5.6 billion in US profits, according to an analysis done by Matthew Gardner at the Institute on Taxation and Economic Policy. During the previous five years, Amazon paid an effective rate of 11.4% on its profits of $8.2 billion, which is about a third of the statutory rate, Gardner states. As countries become increasingly concerned with the exploitation of loopholes in international tax frameworks, we believe the incidence of tax disputes and litigation will increase. 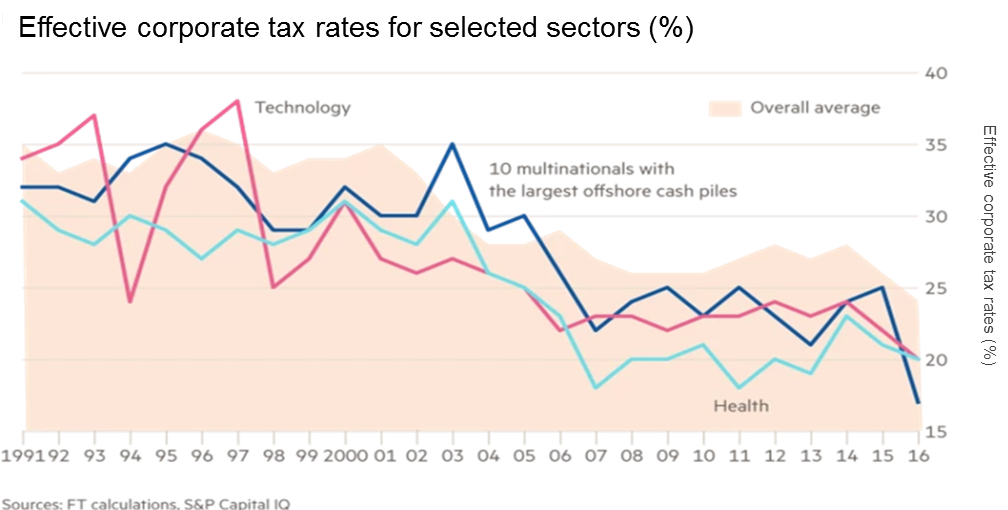 Traditional players are catching up

Amazon took the retail world by storm, but competitors are now fighting back. Walmart, Target, Kroger, CVS, Home Depot – all are now beefing up their online presence and growing online revenues faster than Amazon. Netflix has revolutionized the way media is delivered (streaming) and consumed (binge-watching), but it is still making TV shows and movies the same way traditional studios do, and these studios are now changing the way they deliver content in order to compete with Netflix.

They don’t disclose much, lowering visibility

For several years now, the SEC has been requesting more disclosure from the FANGs. Google doesn’t break out YouTube revenue, Facebook doesn’t disclose much outside of its core Facebook business and Amazon is famously secretive on a variety of metrics, though segment disclosure has improved recently. Capex are also a large black box for all four companies. Some financial analysts we met indicated that their models are not particularly robust due to lack of inputs. They were forecasting a top-line growth rate and margin. As such, future result estimates are primarily an extrapolation of previous results, and not a genuine forecast.

We believe analysts are aggressive in their forecasts

The EPS growth of the FANGs can be extremely volatile and difficult to predict. 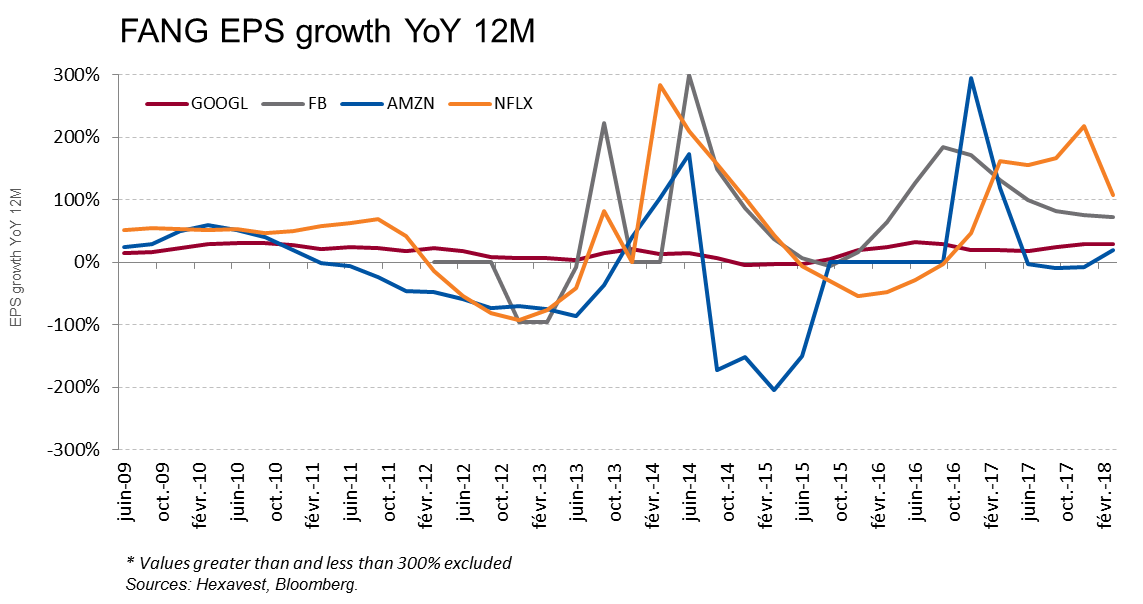 Notwithstanding the potential headwinds facing the companies, the table below shows that earnings estimates from the consensus of analysts are extremely bullish. As discussed above, we believe that Google and Facebook’s growth trajectories might be a source of disappointment given the maturity signs and regulatory issues.

In spite of these bullish estimates, the FANGs’ stocks are very expensive, especially those of Amazon and Netfilx.

We believe that Netflix has no path to free cash flow in the coming years. The company guidance shows it is expected to burn through $4 billion cash this year and to have negative free cash flows for the next several years. In fact, the company’s rise in subscribers roughly coincided with the increasing cash flow burn rate. Some will say it is creating an unrivaled library, but others might argue that media is more like fashion: based on current hits, not old ones. 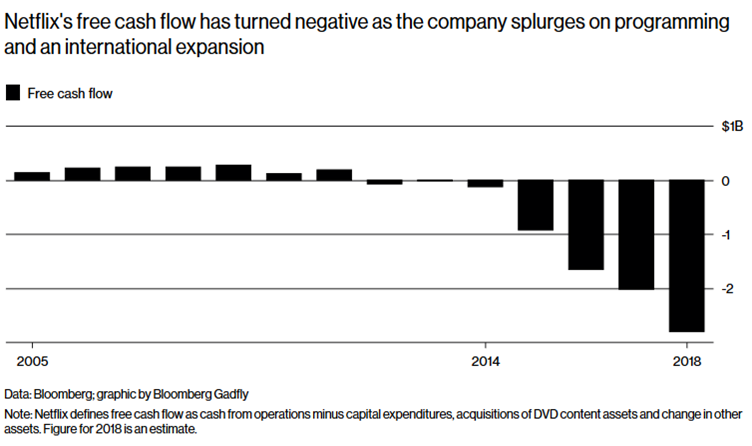 Amazon’s cash flow situation is better, but it too generally spends more than it makes. The growing cost of international expansion and content building is not being met with commensurate increases in cash flow. 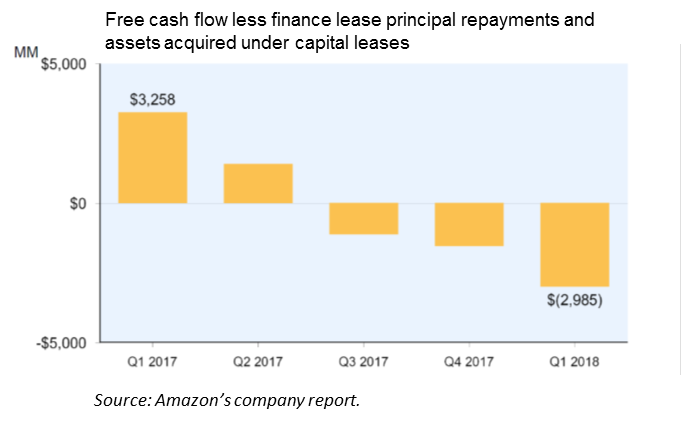 Both companies’ competitive moat is at the cost of a lack of profitability. Some will argue that once they reach scale, they will reverse these facts, thereby justifying their multiples. What if they never can? What is the value of growth if it can’t be monetized?

Fund flows have been exceptionally strong

Those of you familiar with our investment philosophy won’t be surprised to learn that the bullish sentiment on FANGs is a major turnoff for us. As contrarian investors, we have a strong conviction that crowded trades like this one always end badly. Fund flows to e-commerce are rivaling those of the dot-com bubble, while tech flows have also gone parabolic.

They are part of the momentum/growth bubble 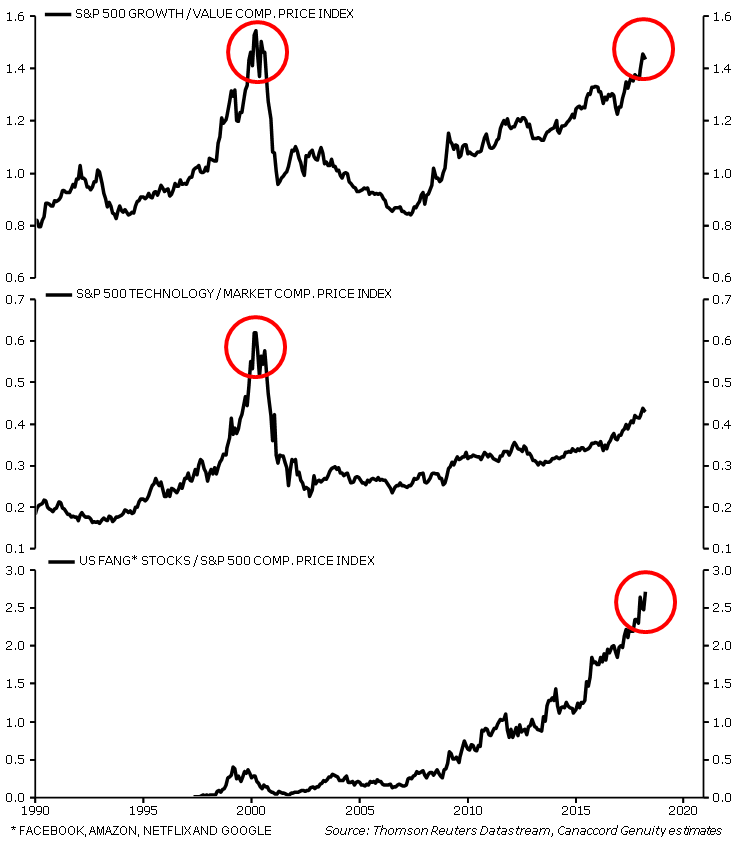 All our vectors suggest caution toward the FANGs at the moment, most notably valuation and sentiment. Of course, we continually re-assess these vectors and adjust our view if needed.

This material is presented for illustrative and discussion purposes only. It is meant to provide an example of Hexavest’s investment management capabilities and should not be construed as investment advice or as a recommendation to purchase or sell securities or to adopt any investment strategy. Any investment views and market opinions expressed are subject to change at any time without notice. This material should not be construed or used as a solicitation or offering of units of any fund or other security in any jurisdiction. References to specific companies and securities do not constitute a recommendation to buy, sell, or hold such securities, nor an indication that Hexavest have recommended such securities for any client account. The opinions expressed in this paper represent the current, good faith views of Hexavest at the time of publication and are provided for limited purposes, are not definitive investment advice, and should not be relied on as such. The information presented herein has been developed internally and/or obtained from sources believed to be reliable; however, Hexavest does not guarantee the accuracy, adequacy, or completeness of such information. Predictions, opinions, and other information contained herein are subject to change continually and without notice and may no longer be true after the date indicated.

Hexavest disclaims responsibility for updating such views, analyses or other information. Different views may be expressed based on different investment styles, objectives, opinions or philosophies. It should not be assumed that any investments in securities, companies, countries, sectors or markets described were or will be profitable. There are no guarantees concerning the achievement of investment objectives, growth trajectories, earnings projections or measurements such as ad impressions growth, price per ad growth, and operating margins. This material may contain statements that are not historical facts (i.e., forward-looking statements). Any forward-looking statements speak only as of the date they are made, and Hexavest assumes no duty to and does not undertake to update forward-looking statements. Forward-looking statements are subject to numerous assumptions, risks, and uncertainties, which change over time. Future results may differ significantly from those stated in forward-looking statements, depending on factors such as changes in securities or financial markets or general economic conditions. Past performance does not predict future results. Not all of Hexavest’s recommendations have been or will be profitable. The operating performance of the FANGs is shown for illustrative purposes only. There is no assurance that projected performance will be achieved and actual performance may differ.

Hexavest is a minority-owned subsidiary of Eaton Vance and considered an affiliate of Eaton Vance Management. Investing entails risks and there can be no assurance that Eaton Vance (and its affiliates) will achieve profits or avoid incurring losses.