The technology sectors – semiconductors, electronic components, computers, software, computer services and so on – were long the prerogative of a few developed countries. The role of emerging markets was  mainly to consume Western technology and to produce low-value-added goods.

Technology represents a substantial share of the MSCI stock indexes of these countries: about 60% for Taiwan and more than 45% for South Korea, with the semiconductor and IT hardware segments being predominant. As for China, it has embraced Internet-related technologies and taken advantage of its rapidly expanding domestic market to create true e-commerce, video games and social networks giants.

In this article, two members of our emerging markets team demystify the composition and evolution of this sector and explain why they consider it an attractive investment theme.

As consumers massively adopt different technologies, some of them become commonplace or are absorbed by other sectors. In 2018, MSCI therefore overhauled the classification of technology stocks, which are now split into three sectors:

In the graph below, we have reconstituted the weight of technology stocks by illustrating the changes following MSCI’s recent classification. The rise of technology in emerging markets over the past decade, from about 11% to about 27% of the MSCI Emerging Markets Index, is impressive and reflects profound change. The weight of the computer hardware/semiconductor/software segments has increased by about 40% in 10 years, but the rapid emergence of Internet stocks is even more remarkable. 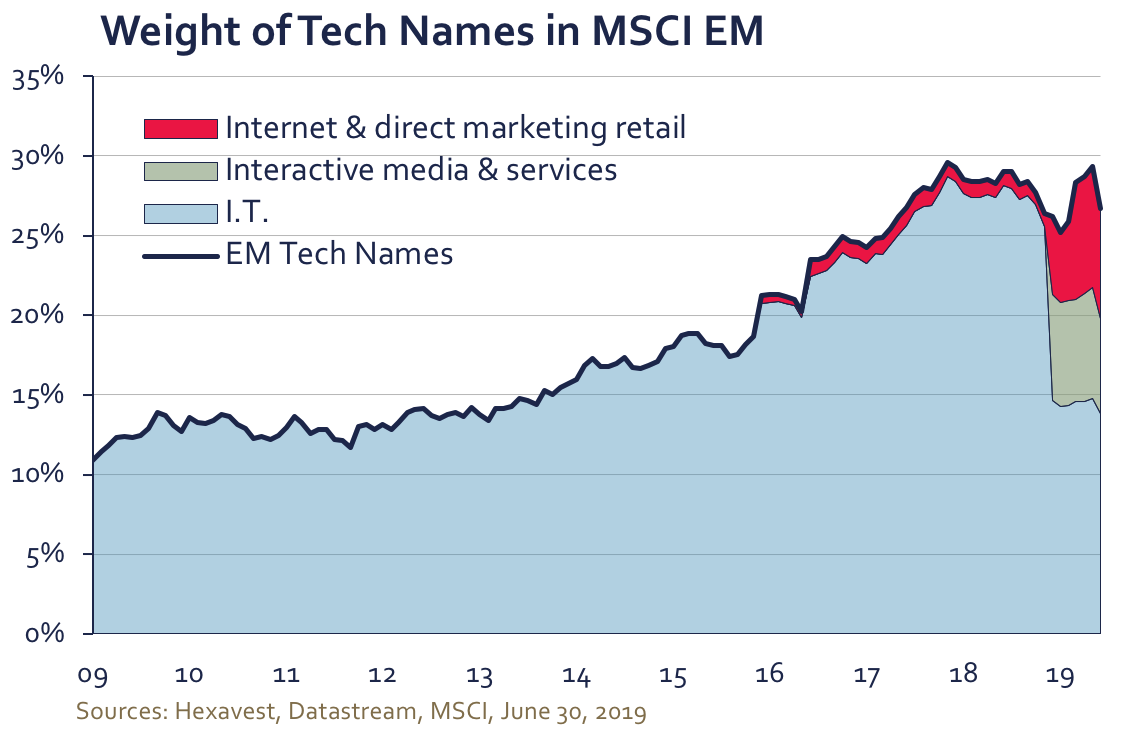 The remainder of this article will focus on the segment that MSCI left in the IT sector, namely computer hardware and semiconductor companies. This segment remains the most cyclical because semiconductors have been subject to global cycles for several decades.

Computer hardware and  semiconductor shares account for about 12% of the MSCI Emerging Markets Index. Contrary to what we see in developed markets, these two industries are highly concentrated, with only two securities, Samsung Electronics and Taiwan Semiconductor Manufacturing Company (TSMC), accounting for 60% of stock market capitalization. Even though the technology sector has outperformed the broad market since the 2008 crisis, significant variations have been observed for the different segments of the sector, as shown in the graph below. 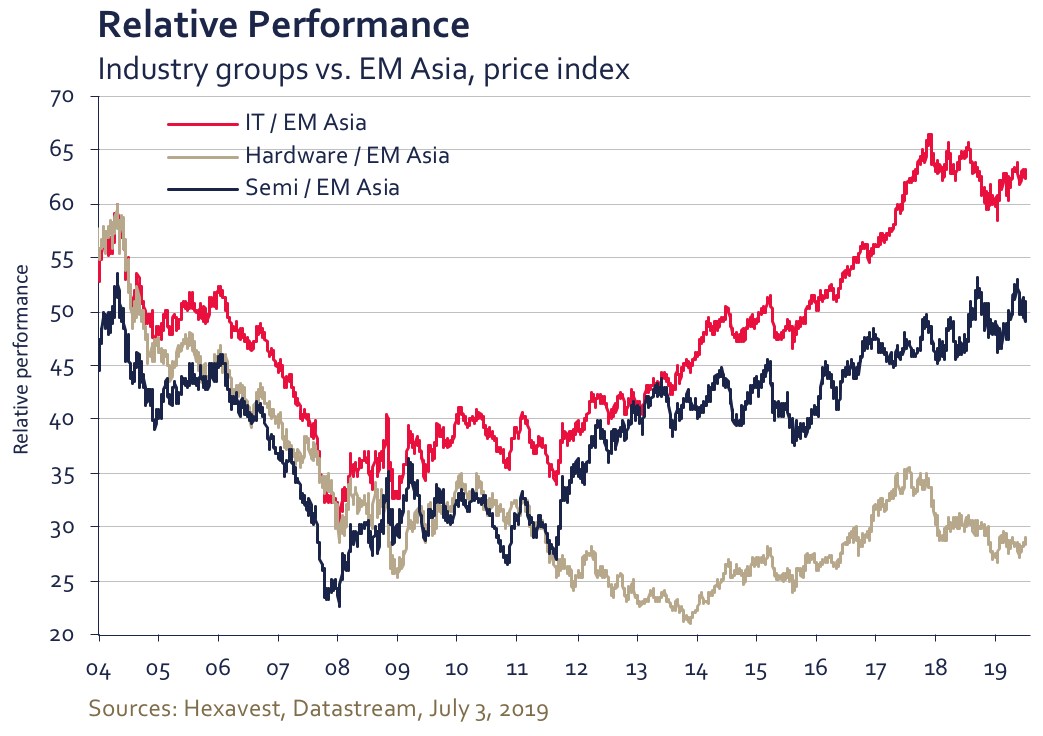 Over the past decade, Internet securities contributed the most to the IT sector’s outperformance (until they were reclassified by MSCI). As for semiconductors, with TSMC in the lead, they have benefited from such phenomena as the rise of smartphones around the world, the constantly growing memory capacity of electronic goods, and the use of cloud-based services by consumers and businesses alike. As for the performance of computer hardware companies, it has been solid but less spectacular. The players in this segment are numerous, they often specialize in one product or component and they are under constant pressure from customers to lower their prices.

Semiconductor sales have almost tripled in the past 20 years, reaching $469 billion in 2018. 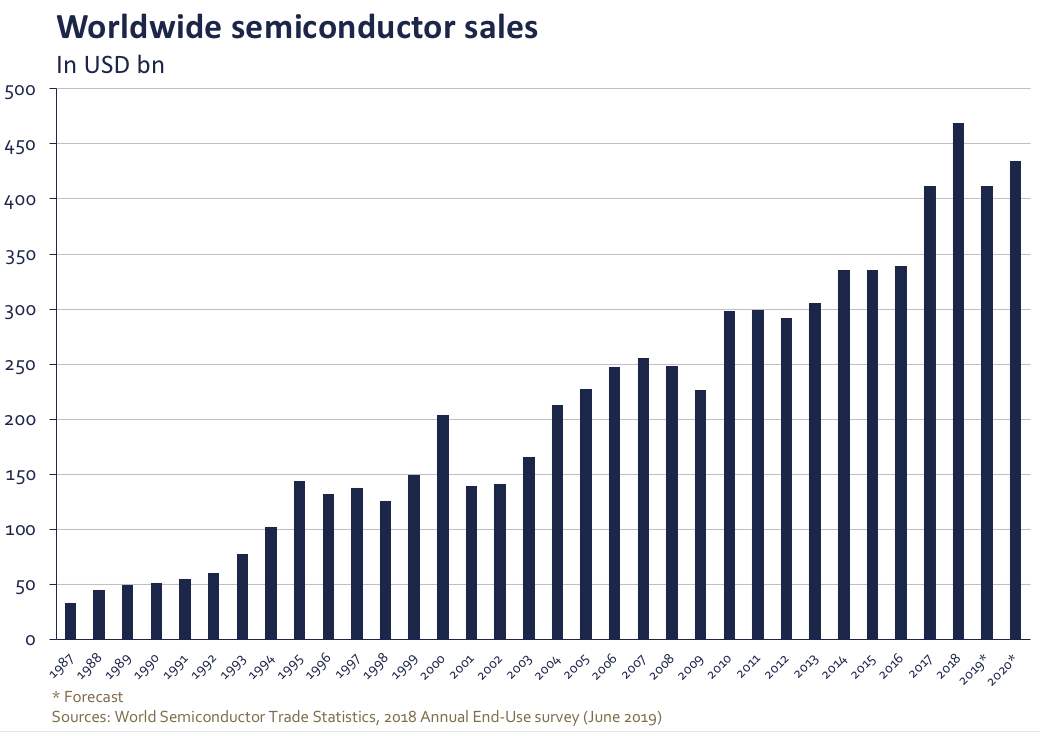 How can such growth be explained? Moore’s Law, which is more than 50 years old and deals with changes in the computing power of computers, still explains, in our view, the exponential increase in the need for semiconductors. In 1965, Gordon Moore, who would become the co-founder of Intel, predicted that the number of transistors in an integrated circuit would continue to double, at constant prices, every year for the next 10 years. He reassessed his prediction in 1975, increasing the doubling interval to 18 months. In short, constant technological advances are reducing the costs of producing electronics and making them increasingly powerful.

Semiconductors are now found in many areas. The telecom and computer sectors are still the most important for the industry, but new applications have allowed semiconductors to penetrate the automotive industry, the industrial sector and the consumer products sector, especially household appliances. Moreover, their presence as a percentage of a product’s added value tends to increase over time. We need only think of the proportion of electronic circuits in a smart building or a new car, which is very different from what it was in the early 2000s.

Reasons for the Industry’s Cyclicality

Beyond their structural growth, semiconductors and electronic components follow pronounced cycles, as shown in the graph below. 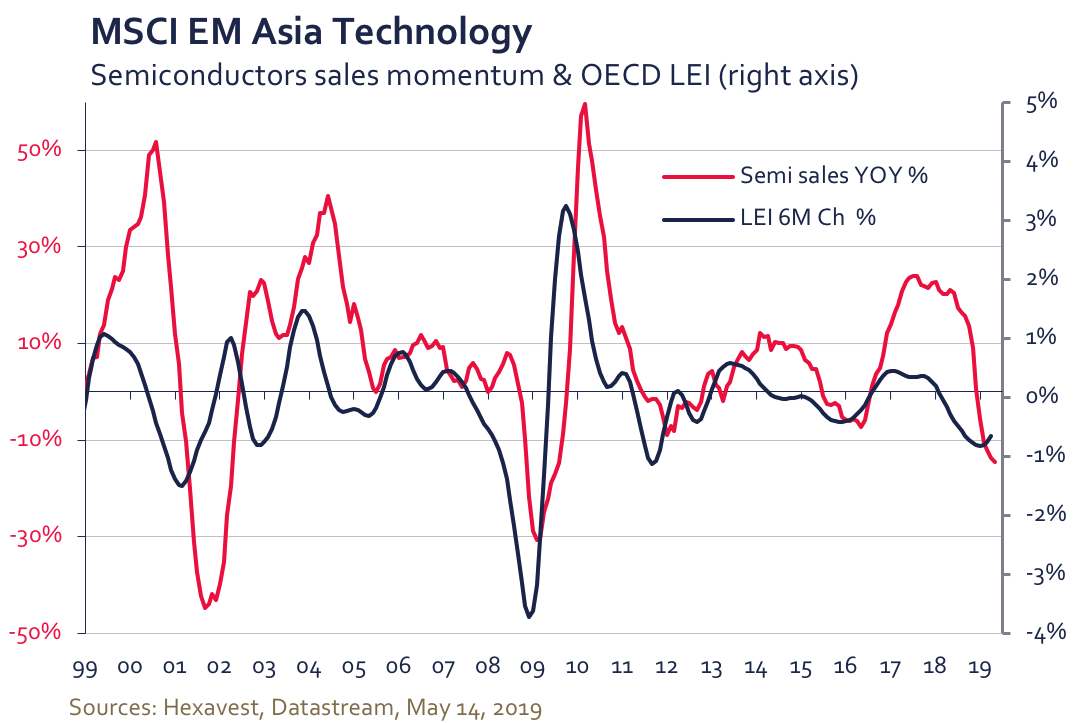 We believe there are several reasons for this cyclicality:

Throughout the cycles, progress and innovation have opened up new horizons, and we think the coming decades will be no exception.

Awaiting the Arrival of 5G

Even though the transition to 5G is already under way, we do not think this technology will soon be functional on a large scale. The main improvement with 5G is an increase in the capacity and speed of wireless networks through a higher frequency band. This requires a higher density of communication towers, so their numbers will have to be increased significantly. Telecom operators should face higher costs than for the deployment of 4G, at a time when 4G has just entered its monetization phase. This financial issue risks dampening some operators’ enthusiasm. 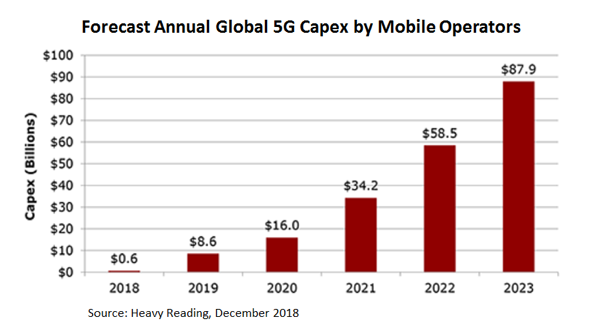 If 4G-related improvements have allowed real-time video to be streamed on our mobile devices, 5G should achieve a higher level of quality, close to the speed of wired networks. For now, few applications require such high speeds.

On the industrial side, the arrival of 5G will likely have many implications for the technology supply chain. R&D is continuing with a view to reducing costs and accelerating deployment. Communication towers continue to be deployed, creating demand for various electronic components. Smartphones need more efficient components (processors, batteries, memory, cameras, etc.). When the large-scale deployment of 5G takes place, it should result in a new growth cycle for these devices.

In addition, 5G opens the door to more numerous and increasingly complex exchanges between individuals and electronic devices, not to mention a proliferation of connections between electronic devices in the form of the Internet of Things (IoT). Even though we can already control a number of home automation functions from our smartphones, it’s still early days. The needs of businesses, plants, cities and governments, which seek monitoring, control, protection and data-exchange functions, represent a structural trend. The increasingly commonplace use of the cloud has led to an explosion in data exchanges globally. In our view, the advent of more efficient mobile networks will accelerate this trend over the next decade. Ultimately, we believe 5G will be an important growth driver for the technology sector.

The Imminent Impact of Smart Cars

Cars contain an increasing number of electronic components, a trend that is no longer limited to luxury models. In fact, today’s cars already incorporate functions that correct human errors, such as autonomous brakes. We believe the arrival of hybrid and electric vehicles will accentuate this trend. They require increasingly efficient and complex batteries, not to mention numerous sensors to control the engine’s power supply and mechanical functions that have become electric. In short, the electronic content of our cars should increase significantly in the short term.

Even though global growth of car sales is anemic, the use of electronic components by this industry is expected to continue growing.

A Structurally Attractive Theme but Timing Is the Challenge

We made the case that the growth drivers of the technology supply chain are no longer limited to phones and computers: the end markets and their level of growth are increasingly numerous and varied. Thanks to innovation, other applications will likely continue to emerge: self-driving cars, the Internet of Things, smart homes, artificial intelligence, virtual reality and so on.

There is no doubt in our minds that the technology sector is an almost unavoidable structural theme. This highly cyclical sector is in a slowing phase, and we believe that securities with reasonable valuations can already be found in Asia’s emerging markets. To take full advantage of the next growth wave in this sector, we are looking for the next attractive entry point.

Source of all data: Hexavest as at June 30, 2019, unless otherwise specified. The returns of the MSCI indices are presented net of deductions from foreign withholding taxes. MSCI data presented may not be reproduced or used for any other purpose. MSCI provides no warranties, has not prepared or approved this report, and have no liability hereunder. Past performance does not predict future results.