A few thoughts on Turkey

A reading of current geopolitical issues in Turkey by our emerging markets team.

In recent days, the Turkish market has given rise to strong comments:

“Turkey: No Thanksgiving Here”
– MRB’s Chart of the Week

“Rather have a bitcoin than a Lira today”
– CLSA’s daily

A scant six months ago, many observers were recommending that investors buy the Turkish market – even though Erdogan’s re-election seemed obvious, the rapprochement with Russia had already been announced, Erdogan’s rhetoric against Germany and the United States was the same as it is today, the oil price had already risen and economic stimulus (dangerous in a late-cycle economy) was already in place. The reality has not changed in the past six months. The United States has begun to impose sanctions on Turkey but, in our opinion, has only taken minor, inoffensive measures to date. As for respect for human rights, we think that securing the release of a U.S. pastor is only a façade designed to cover the real reasons for the Americans’ anger.

Has Turkey effected a rapprochement with Russia?

After a violent incident between Turkey and Russia in 2015, when the Turkish army shot down a Sukhoi Su-24M, which resulted in reciprocal economic sanctions, the relations between the two countries rapidly returned to normal, despite their profoundly different policies on the war in Syria. Has Putin changed his stance? We think so. Otherwise, how can we explain that the Turks invaded a Kurdish portion of Syria without the green light from Washington (which supports the Kurds) and with the tacit agreement of the Russians (who still support Assad)? Even though it looks very much like an alliance of convenience, a rapprochement does seem to have taken place between Russia and Turkey.

Is a divorce between Turkey and the West possible?

Turkey is still a member of NATO but we are seeing rifts with the United States and Europe. We have identified three fundamental factors:

In this context, we have to consider a scenario in which Turkey distances itself from the Western governments.

Has Turkey become an investment opportunity?

In our opinion, the financial markets can live with a dictatorship but not with an unstable regime. Erdogan realizes the economic power of sanctions, to his great chagrin. It is possible that he will suddenly bend to avoid a catastrophe, but his latest statements give the impression that he has not yet taken that path. Will Russia succeed in drawing Turkey into its orbit? It is easy to close ranks in the face of U.S. sanctions, but we must remember that Russia and Turkey are enemies of long date and that many factors continue to put them at loggerheads.

Beyond the geopolitical risks, we see macroeconomic risks in Turkey: our indicators are pointing to a strong risk of recession for the Turkish economy, with or without U.S. sanctions. Massive stimulus for an economy that was already growing rapidly has been accompanied by a rising current account deficit, which now stands at more than 6% of GDP according to Thomson Reuters. Spurred by economic growth and the increase in the oil price, inflation has spiralled upward. The Turkish lira has depreciated by more than 40% since the start of the year, and the short-term effects on the economy (higher inflation and more costly imports) should be negative. 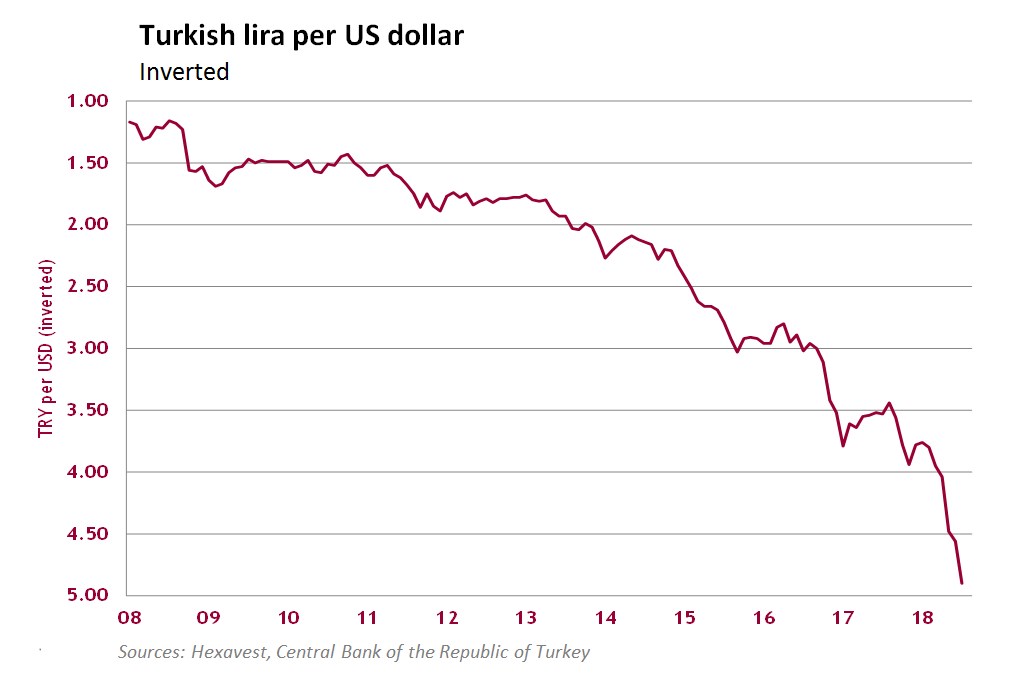 The macroeconomic outlook is therefore too negative for us to consider the Turkish market an investment opportunity.

Should we be concerned about contagion?

We believe there is some risk of contagion. The Turkish currency’s nosedive, coming after that of the Argentine peso, should prompt investors to wonder which currency will be next. Already, some observers are pointing the finger at countries with a current account deficit: South Africa, Indonesia and, to a lesser degree, India. Even though the economic situations in these countries are not comparable to Turkey’s, the increased volatility of their currencies is connected with Turkey’s lira crisis.

As for emerging market debt, international investors hold a great deal of it. A prolonged crisis in Turkey could undermine sentiment further, causing investors to review their positioning in this asset class and drawing other countries into the turmoil.

Given the instability of the regime, the geopolitical tensions, the macroeconomic risks and a possible contagion effect, we are inclined to favour a cautious approach to the Turkish stock market and the country’s currency.

The information included in this article is presented for illustrative and discussion purposes only. It is meant to provide an example of Hexavest’s investment management capabilities and should not be construed as investment advice or as a recommendation to purchase or sell securities or to adopt any investment strategy. Any investment views and market opinions expressed are subject to change at any time without notice. This article should not be construed or used as a solicitation or offering of units of any fund or other security in any jurisdiction.

The opinions expressed in this article represent the current, good faith views of Hexavest at the time of publication and are provided for limited purposes, are not definitive investment advice, and should not be relied on as such. The information presented herein has been developed internally and/or obtained from sources believed to be reliable; however, Hexavest does not guarantee the accuracy, adequacy, or completeness of such information. Predictions, opinions, and other information contained herein are subject to change continually and without notice and may no longer be true after the date indicated. Hexavest disclaims responsibility for updating such views, analyses or other information. Different views may be expressed based on different investment styles, objectives, opinions or philosophies. It should not be assumed that any investments in securities, companies, countries, sectors or markets described were or will be profitable. It should not be assumed that any investor will have an investment experience similar to any portfolio characteristics or returns shown. There are no guarantees concerning the achievement of investment objectives, target returns, , growth trajectories, earnings projections, allocations or measurements such as alpha, tracking error, stock weightings and information ratios. This material may contain statements that are not historical facts (i.e., forward-looking statements). Any forward-looking statements speak only as of the date they are made, and Hexavest assumes no duty to and does not undertake to update forward-looking statements. Forward-looking statements are subject to numerous assumptions, risks, and uncertainties, which change over time. Future results may differ significantly from those stated in forward-looking statements, depending on factors such as changes in securities or financial markets or general economic conditions. Past performance does not predict future results. Not all of Hexavest’s recommendations have been or will be profitable.

Hexavest is a minority-owned subsidiary of Eaton Vance and considered an affiliate of Eaton Vance Management. Investment entails risks and there can be no assurance that Eaton Vance (and its affiliates) will achieve profits or avoid incurring losses.

The information contained in this message is confidential. If you are not the intended recipient or received this communication by error, please notify us and delete the message without copying or disclosing it. No part of this document may be reproduced in any manner without the prior written permission of Hexavest