U.S. dollar: Five good reasons to be wary of the safe-haven currency

Long before the coronavirus outbreak, U.S. dollar liquidity was drying up in the U.S. and other financial markets. In recent years, regulatory requirements governing financial institutions and the reduction of the U.S. Federal Reserve’s balance sheet have contributed to a decline in banks’ excess reserves and created a dollar shortage. This situation probably contributed to the continued appreciation of the U.S. dollar in 2018 and 2019. But the outlook for the greenback has changed dramatically in recent months. Our economist Julien Tousignant provides an analysis and explanations.

1 - The Fed is flooding the world with dollars

The 2020 macroeconomic context, characterized thus far by the coronavirus pandemic, the sudden economic downturn and the resulting financial stress, has created massive liquidity requirements around the world, especially a need for U.S. dollars. With bank reserves already low, the U.S. Federal Reserve had no choice but to open the floodgates, injecting up to $3 trillion into the financial markets through asset purchases and liquidity arrangements (swap lines) with a number of central banks. The Fed in fact became the world’s dollar lender of last resort. The dollar scarcity then gave way to abundance, removing some of the support to the U.S. currency. 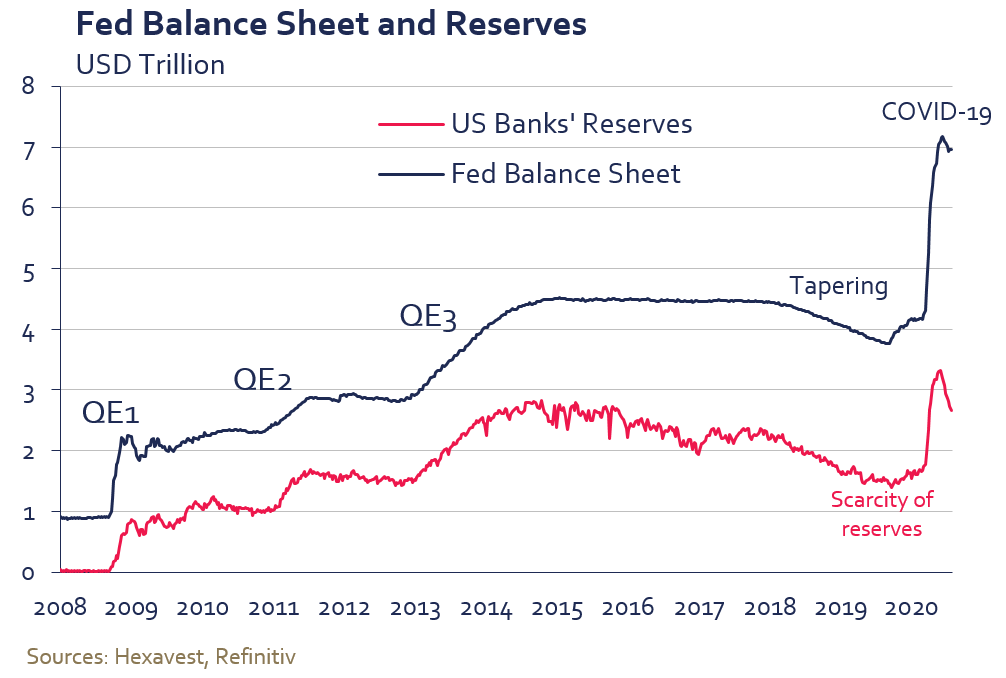 In addition to embarking on a massive quantitative easing program and lowering its key interest rate to zero, the Fed has clearly communicated that it intends to keep rates at zero and monetary conditions highly accommodative for a number of quarters. The Fed’s aggressive actions have helped eliminate the attractive bond yield spread of the United States that benefited its currency since 2013. Japan and the euro zone had less leeway to lower their key interest rates, which were already in negative territory before the COVID-19 crisis began. 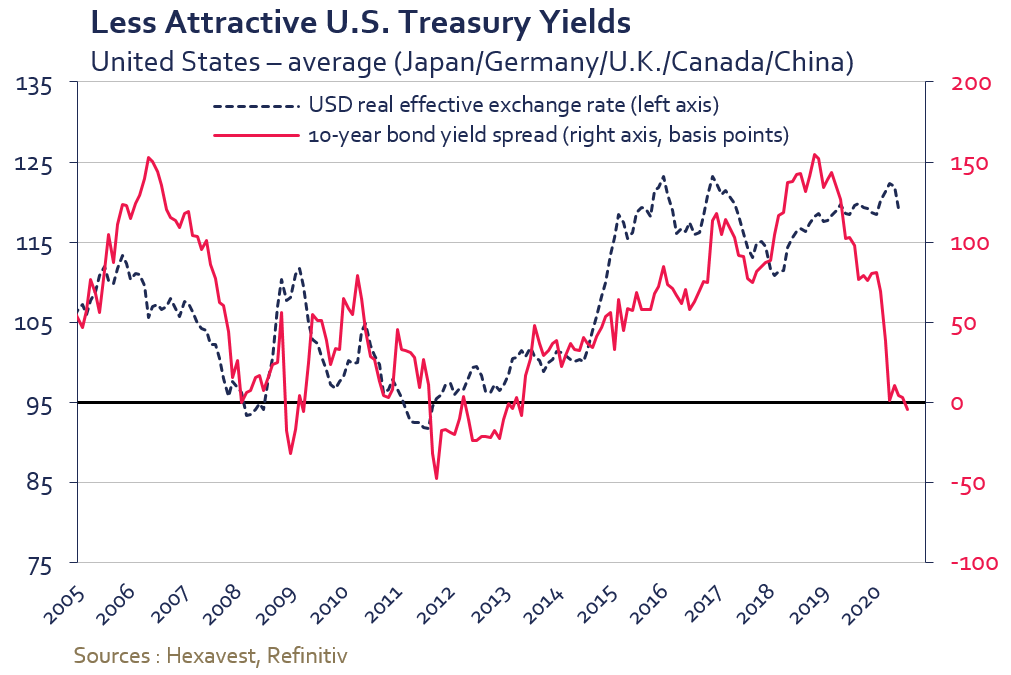 The decline in U.S. yields also reflects the country’s deteriorating economic outlook. As the above graph shows, the bond market is telling us that the spread between U.S. and other important economies has disappeared. Clearly, bond investors no longer perceive the U.S. as having a superior economic outlook.

3 -The fundamentals are crumbling

While the European Union countries are taking advantage of the COVID-19 pandemic to strengthen the role of the European Commission and its unifying power, the political situation in the United States is looking chaotic to say the least, with mismanagement of the health crisis, social tensions, proliferating trade and diplomatic disputes, a colossal deficit, and so on and so forth.

The IMF sees the U.S. fiscal deficit reaching 23.8% of GDP this year, the worst shortfall in 75 years. Adding that to the country’s current account deficit, its twin deficit is likely to exceed 25% in 2020. Such a high twin deficit, which reflects substantial external financing needs caused by a lack of domestic savings, does not bode well for the U.S. dollar if we go by the historical relationship. 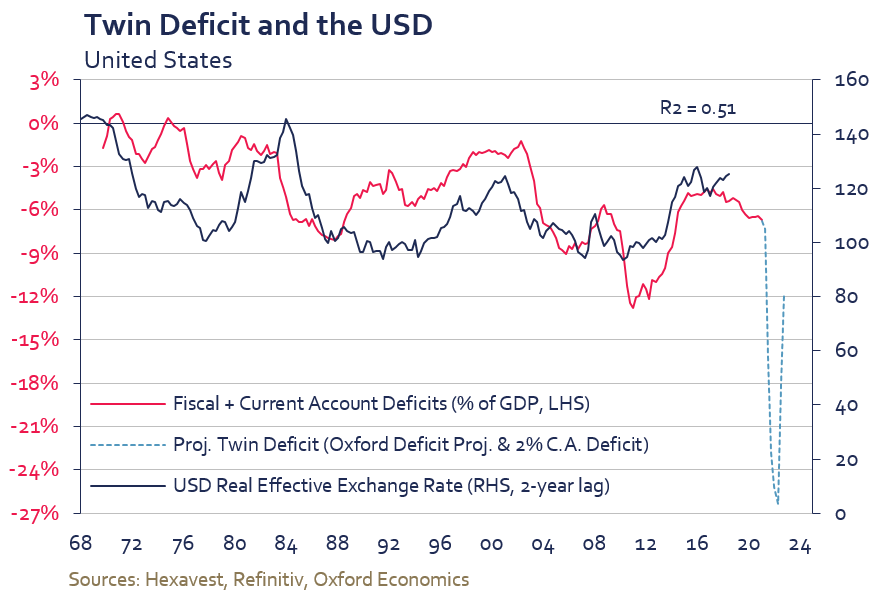 The United States has enjoyed a favourable growth spread vis-à-vis other developed countries in recent years. 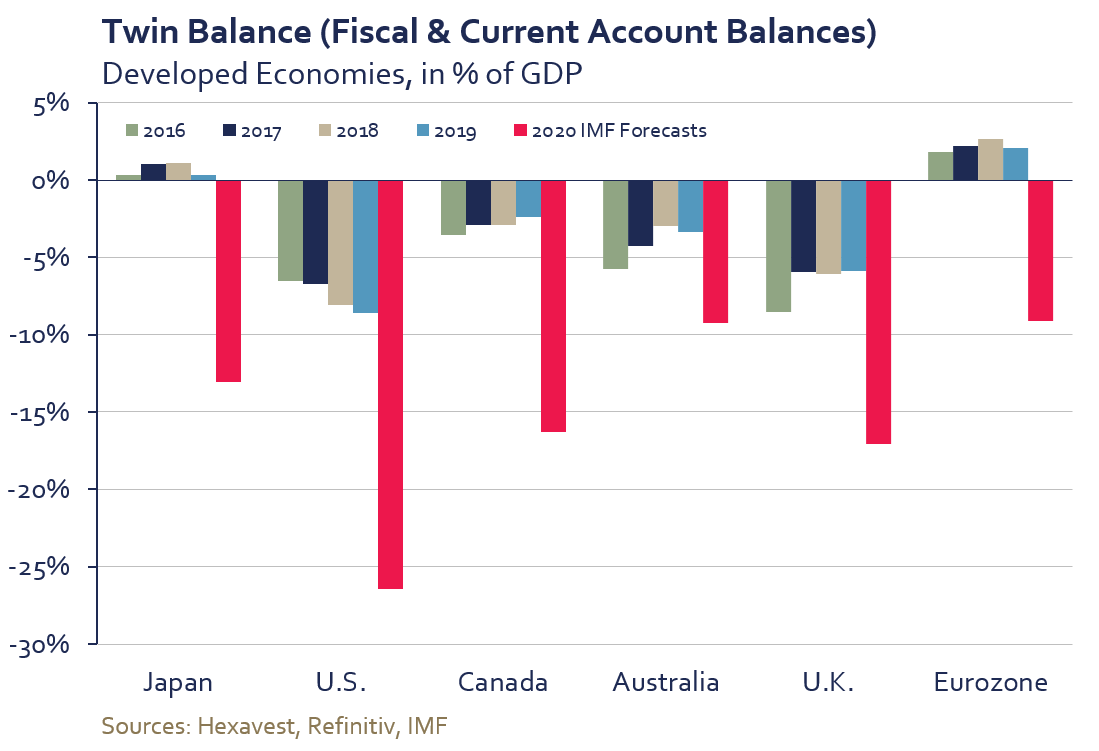 This advantage has been due partially to tax cuts for U.S. households and businesses, which have served as a temporary stimulus. The same can be said of the generous assistance offered to the unemployed during the COVID-19 crisis. The government’s fiscal leeway is shrinking and the country’s economic growth may begin to suffer.

4 -The dollar’s valuation is unattractive

In addition to the interest rate spread that no longer favors the United States, the U.S. dollar appears to be particularly high relative to its historical average. As shown by the graph below, which compares real effective exchange rates1 with their historical averages, the greenback is the most expensive currency among the major developed country currencies.

5 – Speculators are already quite pessimistic, but other investors have not yet changed their positioning

It cannot be said that investor sentiment toward the U.S. dollar is very positive. Speculators have rapidly reduced their exposure to the currency since March, and its recent weakness has made headlines in the financial press. Rather, it is the euro that is currently in favour with speculators. Such a stretched positioning could cause the dollar to rebound in the short term, but in our view a degree of pessimism could persist for a number of quarters, as has been the case in the past. 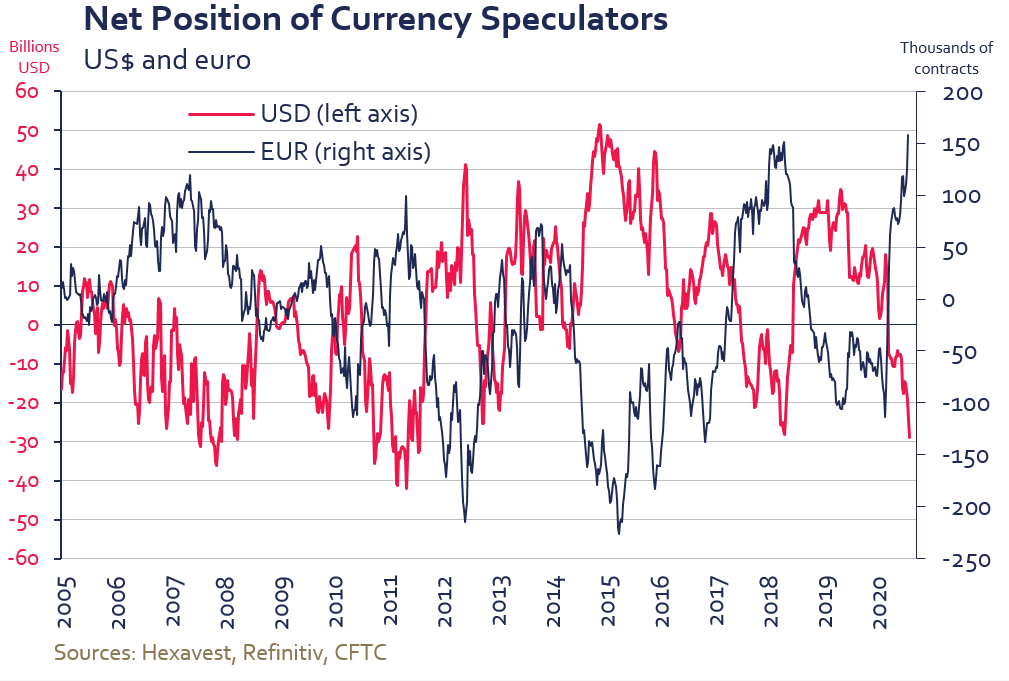 We should keep in mind that speculators are quick to reposition themselves, while other types of investors take longer to effect a change of strategy, especially given the size of managed funds. We think that repositioning by asset managers could eventually cause a second wave of U.S. dollar weakness.

First, the cost of hedging FX risks of U.S.-dollar exposure has fallen considerably in the past two years. As a result, it has become much less constraining for Japanese and European investors, for example, to hedge the U.S.-dollar exposure from their U.S. bonds and equities. An increase in dollar hedging by foreign investors would hurt the greenback. 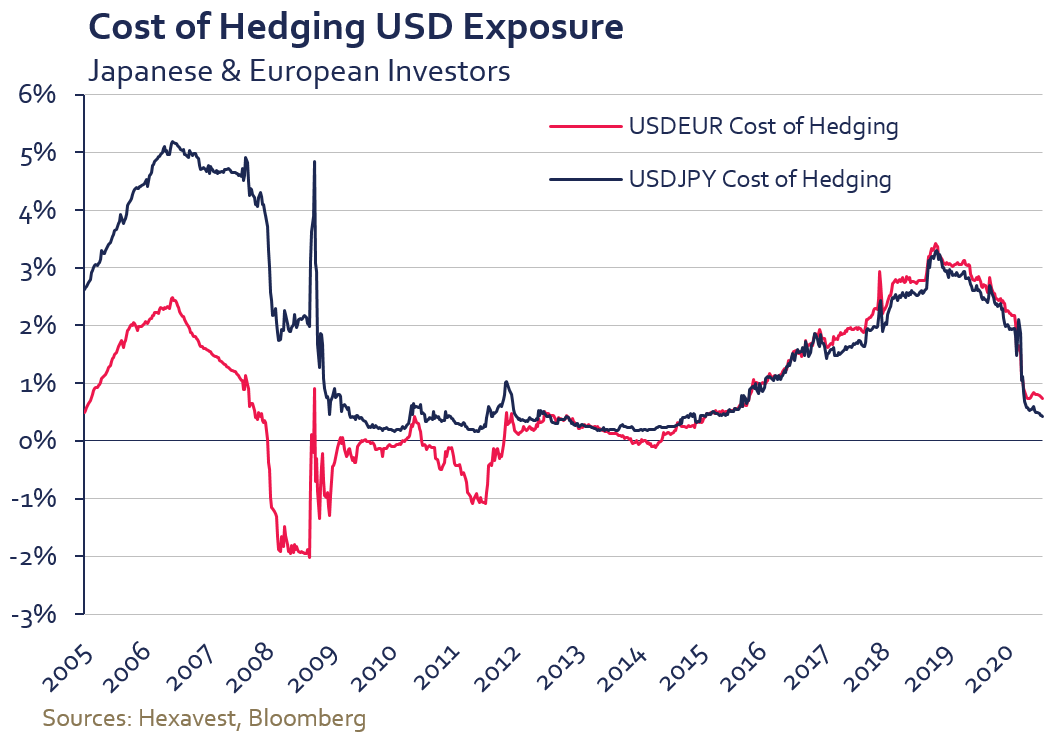 Second, the outperformance of U.S. equities and data on institutional investor positioning show that investors have a significant overweight in U.S. equities. The U.S. stock market and the dollar tend to follow a similar cycle over the long term. A loss of appetite for U.S. equities and outflows from the market could weaken the dollar. 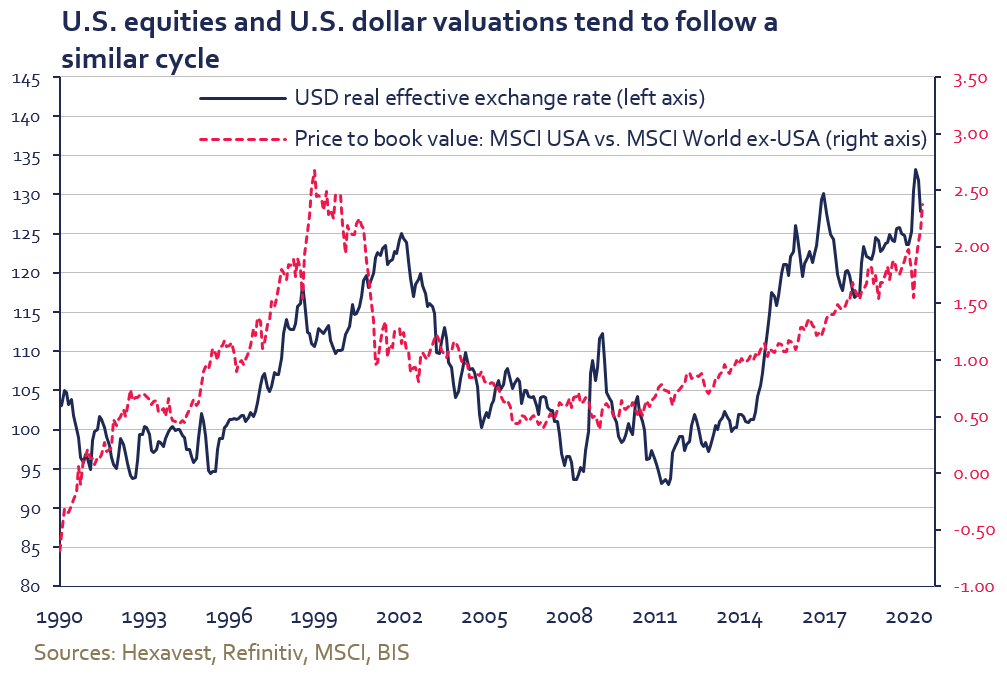 Third, in the longer term, managers of foreign exchange reserves could reduce their U.S.-dollar allocation, in part because of the less attractive macrofinancial outlook discussed above. China’s growing role in global trade and the financial markets, as well as the internationalization of the renminbi, could also prompt a number of entities to gradually increase the weight of the Chinese currency in their reserves. The euro could also gain traction, but the euro zone will most likely have to show further progress to win the trust of reserve managers. That being said, we think the dollar’s status as the reserve currency par excellence is safe in the short run. The greenback has already experienced depreciation cycles that have not cast doubt on its role in this regard.

The U.S. dollar remains a safe haven for investors in turbulent times. Despite our cautious approach to the equity markets, we have underweighted the U.S. dollar in recent months for the five reasons we just mentioned. It is also worth noting that this underweight is expressed mainly in relation to other safe haven currencies, such as the Japanese yen and the Swiss franc. It is possible that the scale of our underweight will vary in the short term, but we think the greenback’s downward trend is likely to continue for several years.

1 The real effective exchange rate index of a country’s currency is a weighted average of the country’s exchange rate with its trading partners where the weights are determined by the extent of trade with these different partners. The index is also adjusted to take into account the differential in consumer inflation between the country and its partners.

Source of all data and information: Hexavest as at July 31, 2020, unless otherwise specified.

he opinions expressed in this document represent the current, good-faith views of Hexavest at the time of publication and are provided for limited purposes, are not definitive investment advice, and should not be relied on as such. The information presented herein has been developed internally and/or obtained from sources believed to be reliable; however, Hexavest does not guarantee the accuracy, adequacy, or completeness of such information. Predictions, opinions, and other information contained herein are subject to change continually and without notice and may no longer be true after the date indicated. Hexavest disclaims responsibility for updating such views, analyses or other information. Different views may be expressed based on different investment styles, objectives, opinions or philosophies. It should not be assumed that any investments in securities, companies, countries, sectors, currencies or markets described were or will be profitable. It should not be assumed that any investor will have an investment experience similar to any portfolio characteristics or returns shown. This material may contain statements that are not historical facts (i.e., forward-looking statements). Any forward-looking statements speak only as of the date they are made, and Hexavest assumes no duty to and does not undertake to update forward-looking statements. Forward-looking statements are subject to numerous assumptions, risks, and uncertainties, which change over time. Future results may differ significantly from those stated in forward-looking statements, depending on factors such as changes in securities or financial markets or general economic conditions. Past performance is not necessarily indicative of future performance. Not all of Hexavest’s recommendations have been or will be profitable.