Hong Kong protests and their impact on an already vulnerable economy

The 2019 Hong Kong anti-extradition protests have garnered a lot of attention worldwide. If enacted, the extradition bill proposed by the Hong Kong government would allow local authorities to extradite people to mainland China. Earlier in August, the political crisis has deepened as protesters raised the pressure on authorities by occupying the airport of “Asia’s world city” after alleged police brutality. Very large anti-government rallies assembled between tens of thousands to two million Hongkongers (up to 25% of the population) from all segments of society (civil servants, teachers, financial sector and medical professionals, etc.).

In this article, we highlight a long-standing malaise that has already affected the Hong Kong economy and we share our investment outlook for the region.

What do Hongkongers want?

According to various public sources, the protesters have five demands1. They call for:

In our view, the protesters’ motivations are much deeper than the extradition bill. We believe the main cause of the current social unrest is the clash between two very distinct societies. On the one hand: Hong Kong’s capitalist society, where individual liberties and the rule of law are fundamental. On the other hand: mainland China, where a “socialism with Chinese characteristics” reigns (communism).

Under this “one country, two systems” framework, Hong Kong will be allowed to keep its legal, regulatory and tax systems until 2047. But many Hongkongers fear that this framework is at risk. The extradition bill is perceived by some as the final straw in the ongoing erosion of “one country, two systems”. And part of the population seems to think it is worth fighting for.

Hong Kong’s economy is increasingly interconnected with China and is currently suffering from a slowdown in trade and consumption. 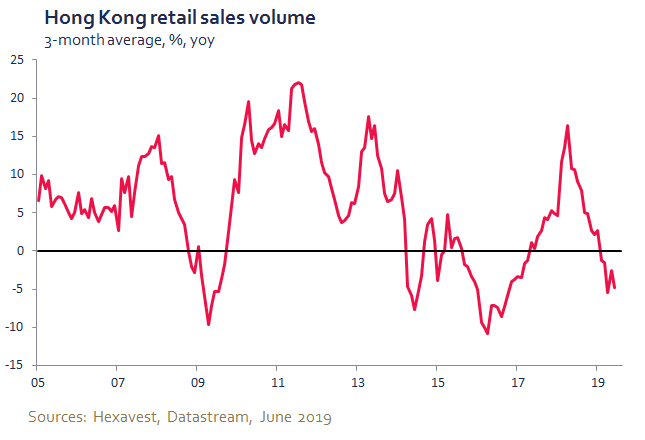 In the short term, the protests could have a significant negative impact on Hong Kong’s economy as trade and retail sales are largely driven by China. Hong Kong’s retail industry, which has already been slowing down since 2018, is increasingly getting hit by the slowdown in tourism, which really started in July. According to the South China Morning Post, the slowdown in tourism accelerated to -30% in early August. In fact, Hong Kong’s financial secretary recently said that Hong Kong was at serious risk of its first recession since 2009 if the protests coupled with the trade war continued2. And the city has already cut its growth estimate for 2019 to 0%-1% (from 2%-3%) and announced a $2.4B stimulus package to limit the damage2.

In the long run, the outcome of the protests could pose a risk for Hong Kong’s raison d’être as China’s financial center. Although Hong Kong has become smaller relative to China’s economy (3% vs. 18% when the British turned over control to China in 1997, according to Capital Economics), it still punches above its weight given its status as China’s international financial center and gateway to foreign capital.

For Chinese companies, this access to foreign capital via Hong Kong takes even more importance when considering the proposed U.S. Equitable Act, which could lead to the delisting of Chinese firms from U.S. stock exchanges if they don’t comply with U.S. laws on financial transparency. The U.S. could also take the extreme measure of reneging the U.S.-Hong Kong Policy Act, which would put Hong Kong’s status as a trade hub in jeopardy. Thus, the Americans would no longer view Hong Kong as independent from China (in terms of trade and economic control).

Property prices remain resilient for now, but longer-term observers will recall that Hong Kong property prices fell 70% during the Asian Financial crisis (between 1997 and 2003). Rising local rates driven by capital outflows (mainly Chinese capital and rich Hongkongers’ wealth moving elsewhere and expats moving their capital outside the city) and a declining stock market could all lead to falling property prices, the core of Hong Kong’s economy. 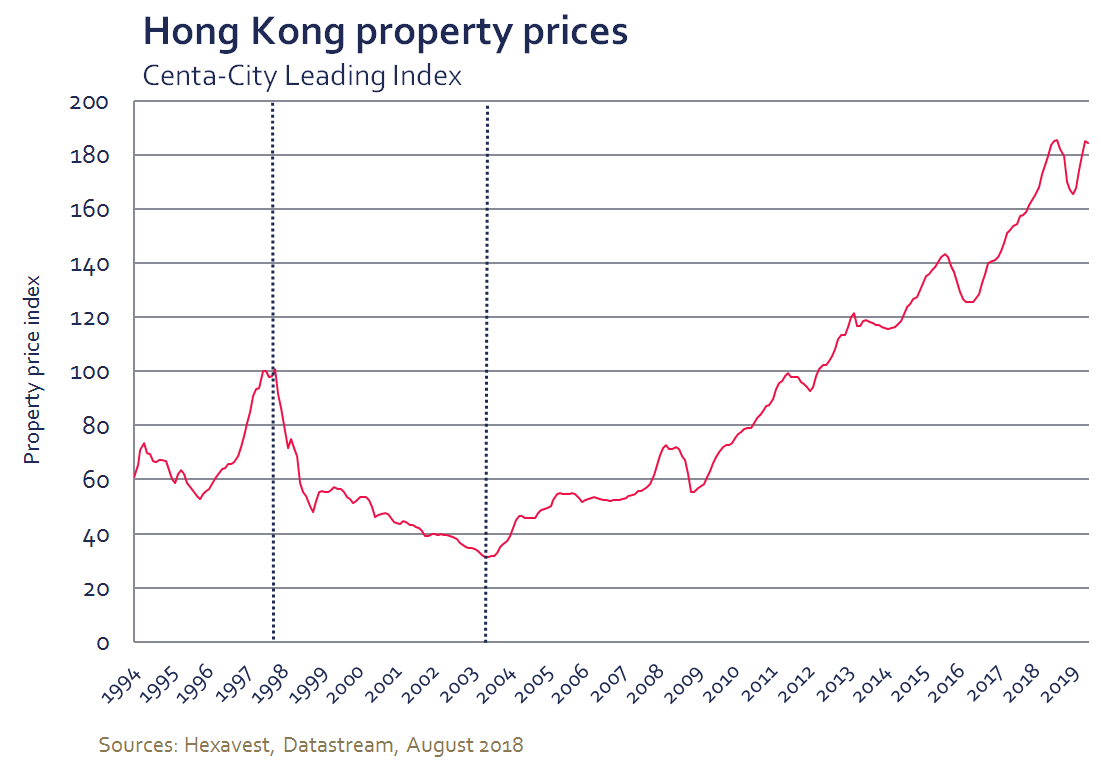 While the Hong Kong stock market did not initially react to the protest movement, it has suffered and underperformed the MSCI World since late July, as protests turned violent and the probability of mainland forces intervening in Hong Kong increased. Property stocks and Macau casinos have taken the brunt of the selling (despite Macau proving resilient so far from a fundamental perspective). 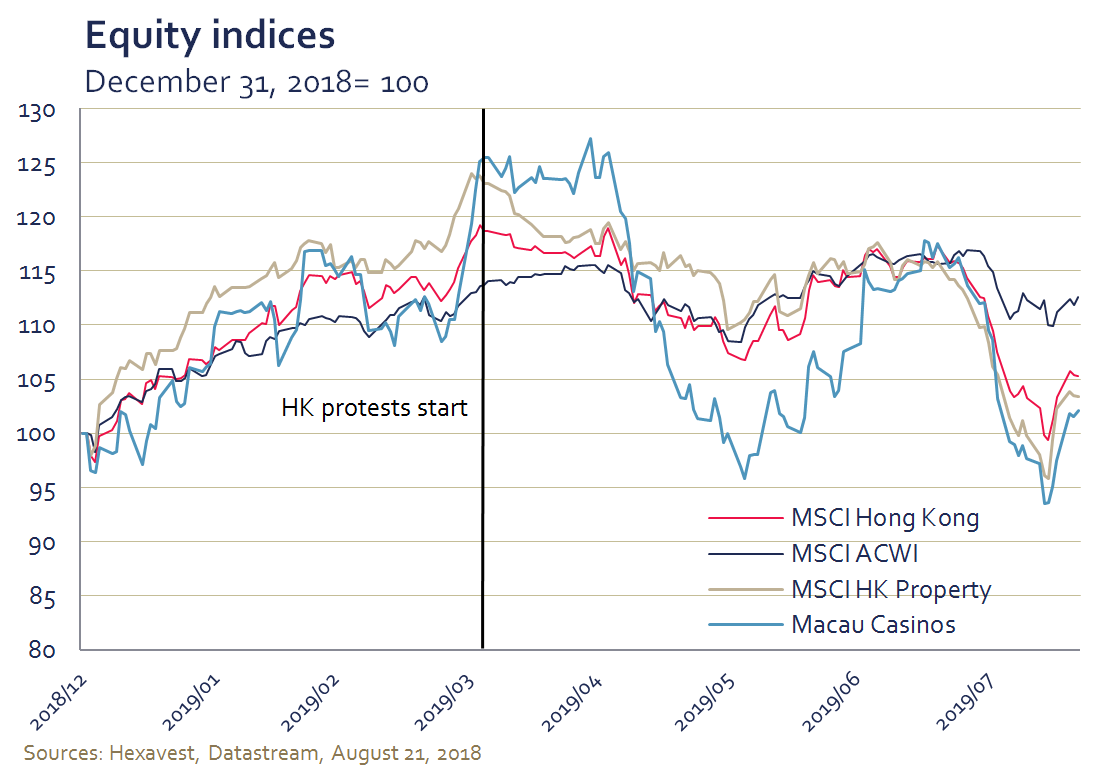 We remain cautious on Hong Kong shares not only because of the social unrest but also because Hong Kong is becoming a key issue in the U.S.-China trade negotiations.

On the currency side, we see rising risks that the Hong Kong dollar’s peg to the U.S. dollar breaks in the next few years. Given the tight band (the exchange rate is allowed to move between 7.75 and 7.85), we see the holding cost of being underweight the currency as small relative to the potential downside that would come from the political decision to devalue this expensive currency.

We believe that the Communist Party wants to avoid large protests as the celebrations for the 70th anniversary of the founding of the People’s Republic of China on October 1st approach. By then, classes will have started and Beijing probably hopes that student protesters will go back to their daily lives.

So far, the government has given limited concessions to the protesters’ demands and we see the request of free elections via universal suffrage as highly unlikely to ever go ahead, thus making a durable settlement improbable.

If Chinese troops are sent into Hong Kong to restore order, the consequences could be catastrophic for global growth. Amidst the ongoing trade war, the Hong Kong situation and U.S.-China trade negotiations are intertwined. We find it hard to fathom President Trump signing a trade deal with a government that might authorize repressive actions against mostly peaceful protesters. Other Western governments would also be forced to isolate China on ethical grounds if the repression is intensified, further weakening the engine of global growth.

Beijing probably hopes that protesters will go on with their daily lives and lose public support, akin to what happened in the 2014 Umbrella Movement (a political movement that emerged during the Hong Kong democracy protests). The importance of Hong Kong would be maintained and the city would increasingly be integrated in the Greater Bay Area (Hong Kong, Macau, Guangdong), as more mainland professionals go to work for Chinese financial and logistic firms in Hong Kong3.

Source of all data and information: Hexavest as at August 29, 2019, unless otherwise specified.

The returns of the MSCI indices are presented net of deductions from foreign withholding taxes.

MSCI data presented may not be reproduced or used for any other purpose. MSCI provides no warranties, has not prepared or approved this report, and have no liability hereunder. Past performance does not predict future results.